Native American Grinding Site on The Way to The Area

The next four images are of  Mortero's a form of mortars found in rocks. This group was situated within a pile of rocks on the long hike just to get to the area where we wanted to hike into. The mortero is a grinding feature for processing food with the use of a pestle stone.The food is place within the mortero and the pestle stone is hammered up and down to grind the food.This could be nut, seeds,roots or other tough foodstuff.

Pestle Stone (not from this hike) 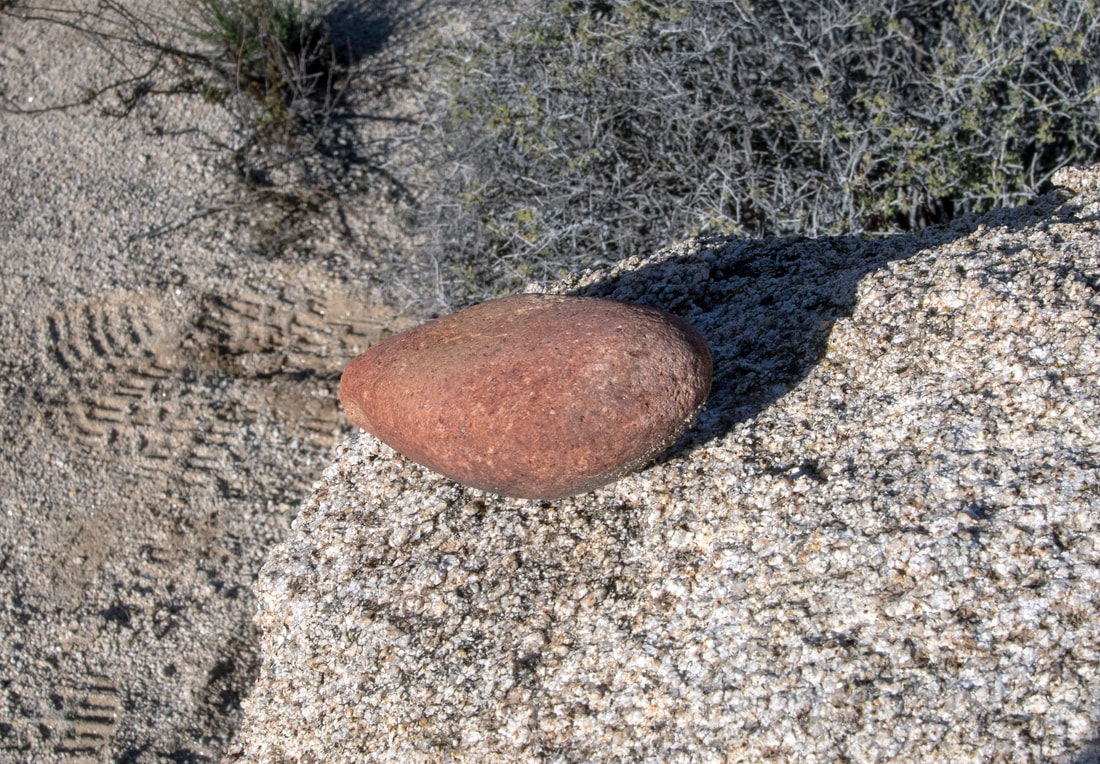 The Pestle stone was used in Mortero's to grind food notice that the one end has been roughened up by the hammering of the stone into the mortero. This was seen on a later hike, but is used for an example. 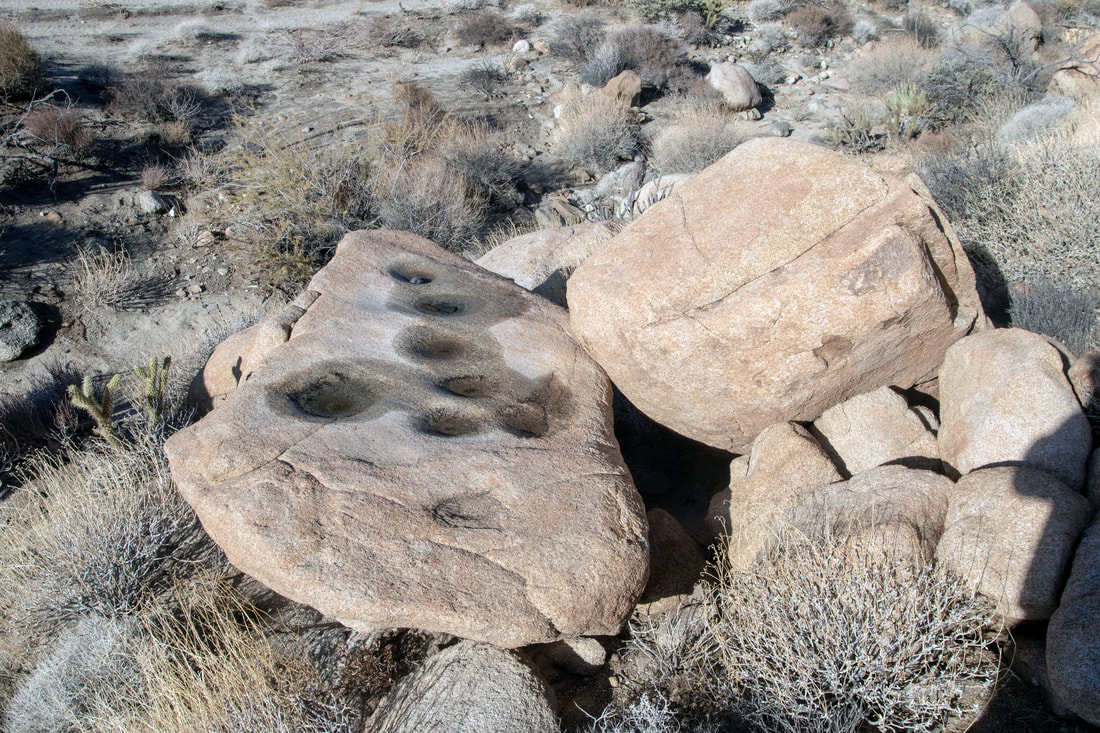 Needless to say there was a lot of Mortero's. This area which seems sparse and barren to us does support a varied amount of plant life. The amount of Grinding Feature seen, points to the people who were here took advantage of this. 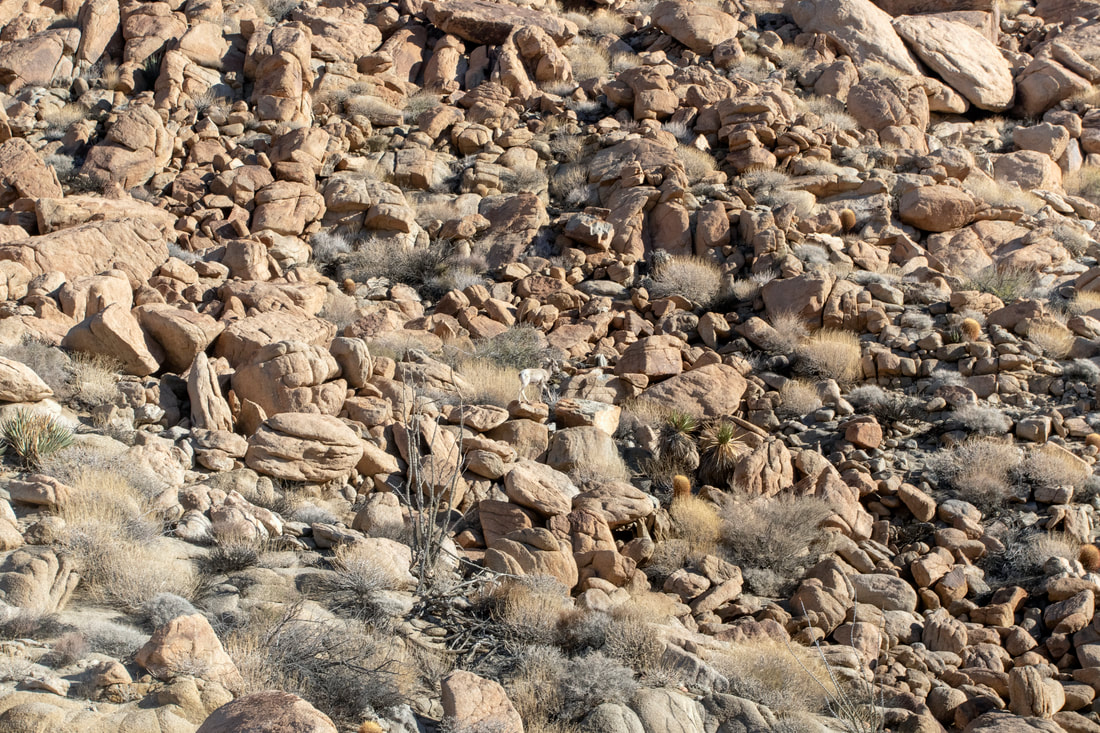 Some Times Wildlife can be right in front of you,but in nature it pays to be inconspicuous. This young Big Horn knows how to blend in. 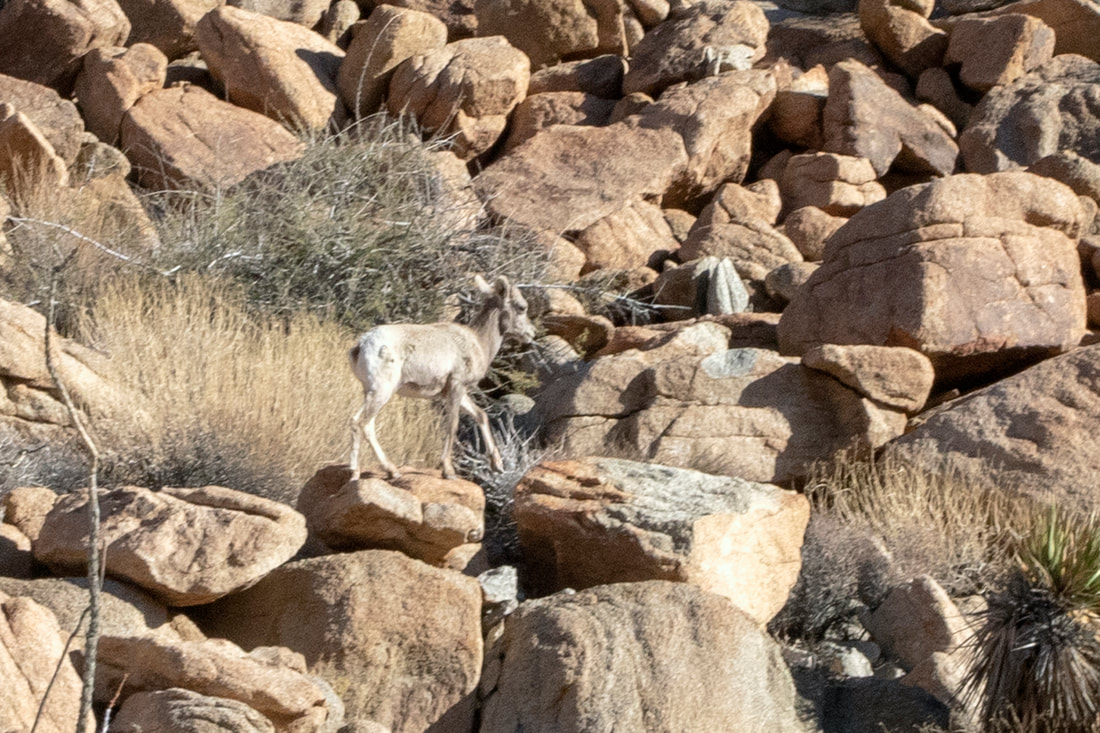 Here it is The Big horn was actually a lot closer when first seen. I was actually checking out some rocks when it bolted out. Needless to say we all headed for our cameras but the Big Horn is not only surefooted but swift.

The Hike to this point the opening to the canyon was an arduous hike to get here, then to enter you hit this which goes on for a good ways. Then a long hike ahead of you. When you finish you get to turn around and come back.
There are also branches within so don't mistake these on the way back. The area is remote and not where you want to get into trouble. I did exploratory hikes into both ends and the surrounding area before I decided to do it with friends.
The Area is known to be frequented by Human traffickers and Smugglers. 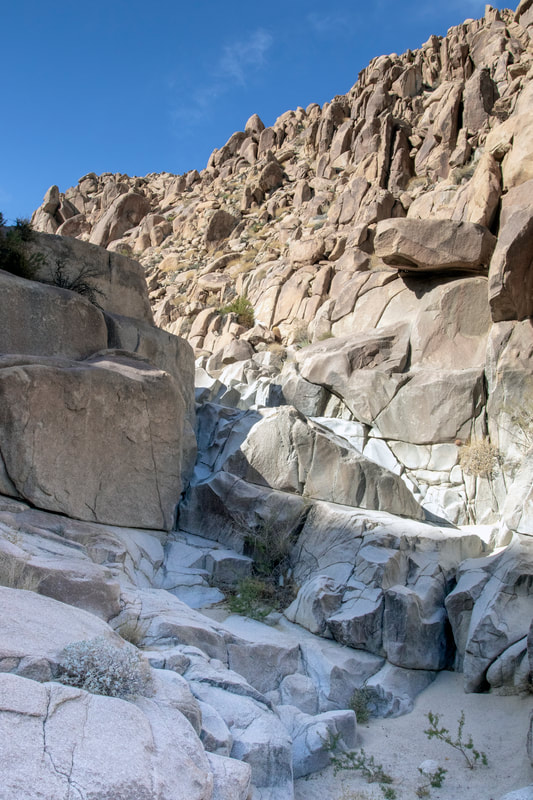 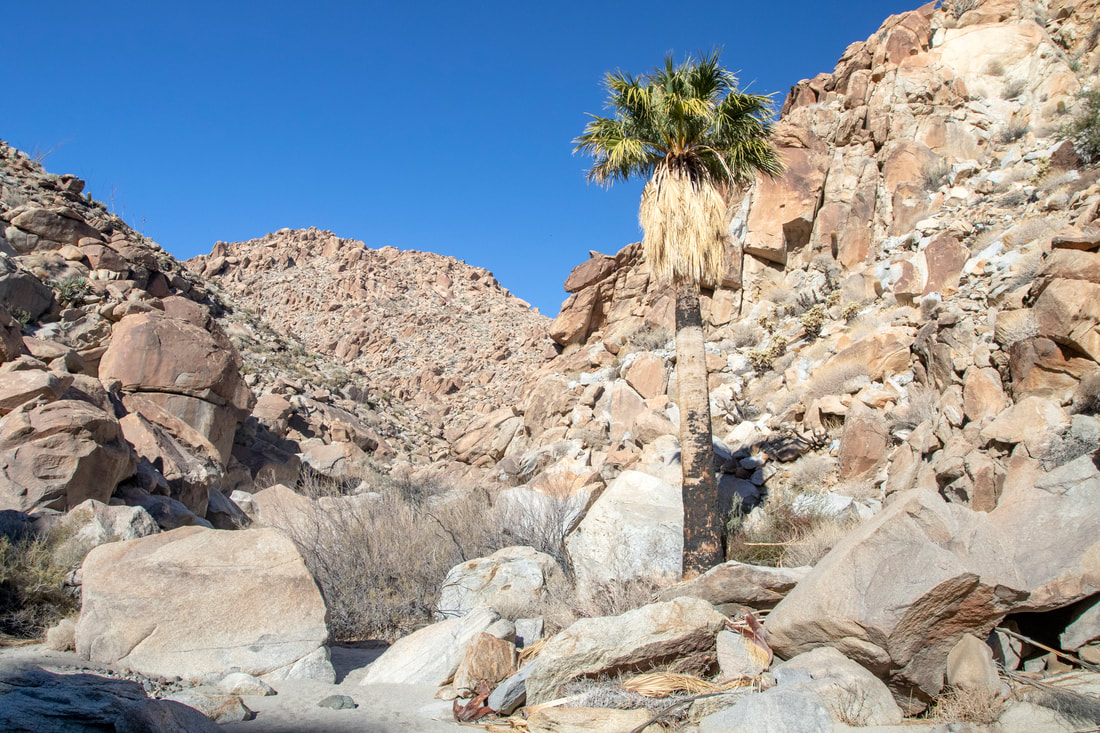 A Palm Tree within the Canyon, There are some very rough sections to get into the Canyon areas from the end we came in.
The Petroglyphs are both a bit strange and unusual they are spread out for miles and some are very hard to find. 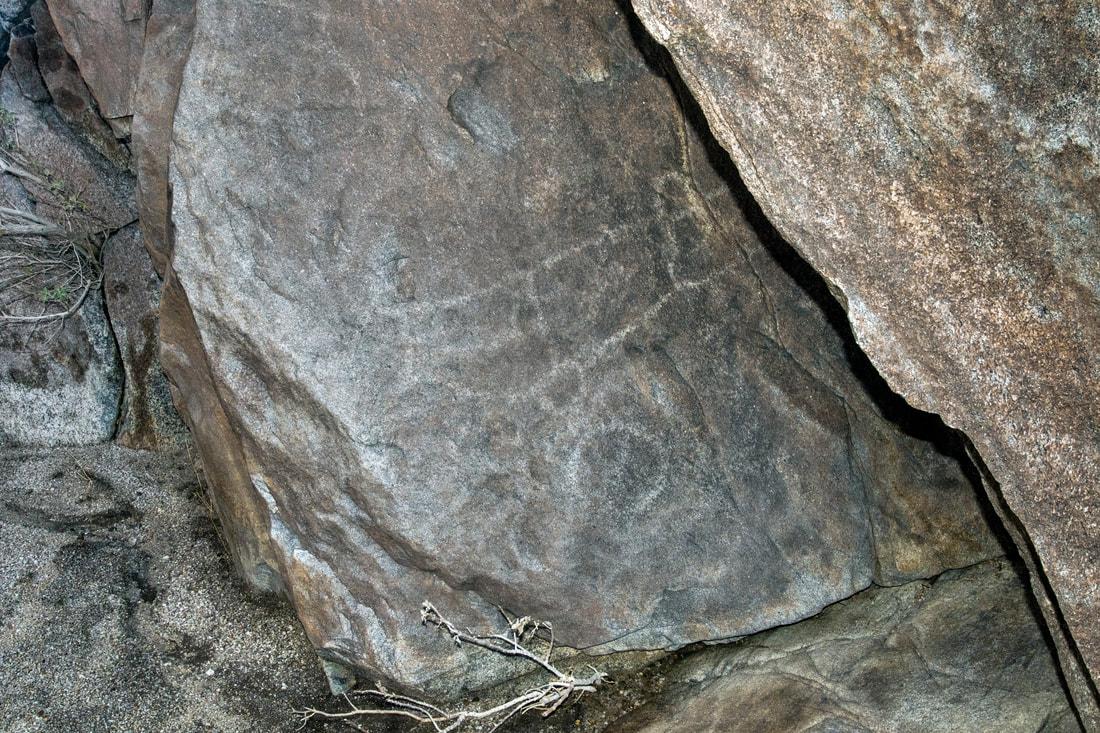 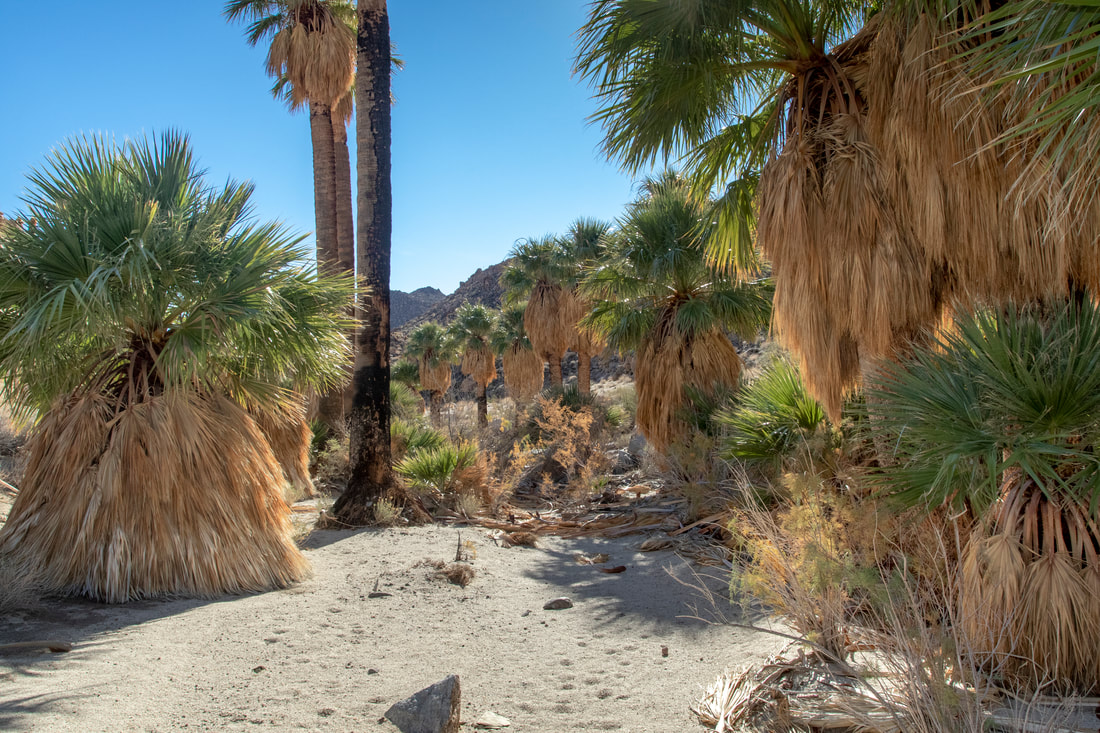 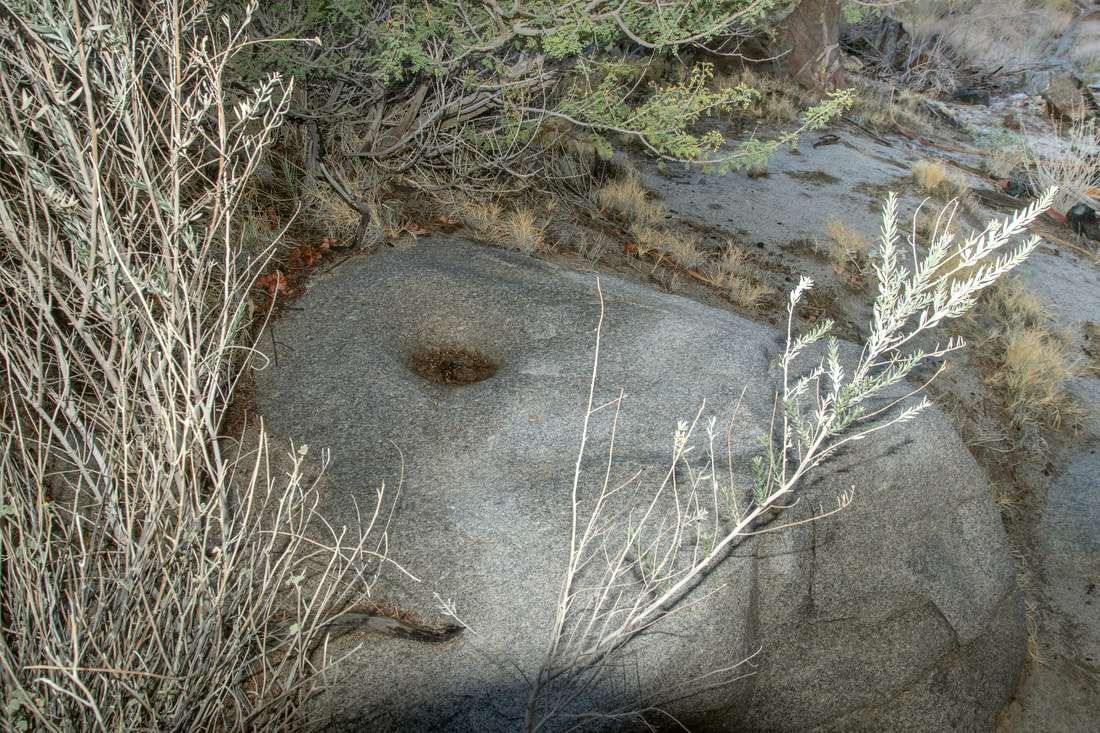 The canyons are loaded with grinding features, if I would post them all there would be pages.

So This Site is a controversial, The trouble maker is the one that looks like a ship with a furled sail on it,though when you get down to it there are two that look like ships.There are multiple stories for this and the supporters of them can get passionate in their support. One Story with different variations is about Lake Cahuilla of which the Salton Sea is now filling a small area of what use to be the far larger lake. The lake was supposed to be in the story connected to the sea by an inlet and a Spanish Ship laden with treasure and pearls sailed up this connection. The ship was there a short time when a mighty earthquake jarred the land, the water receded when the land lifted up and stranded the ship many miles from the sea.
There a variation with Vikings and Gold, many people have claimed to have found the ships in isolated areas
There also the story that the artist may have observed one of the early explorers sailing along the coast, possibly Rodriquez Cortez himself in 1542. Then again there could be another meaning lost  with the passing of time. 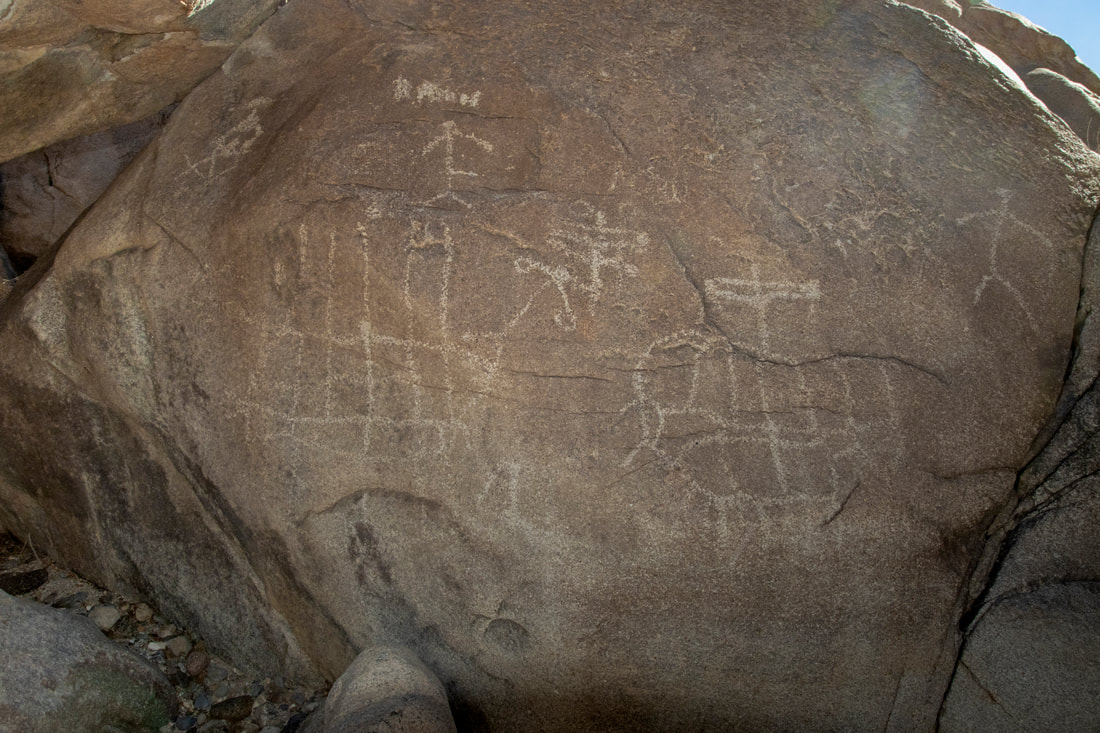 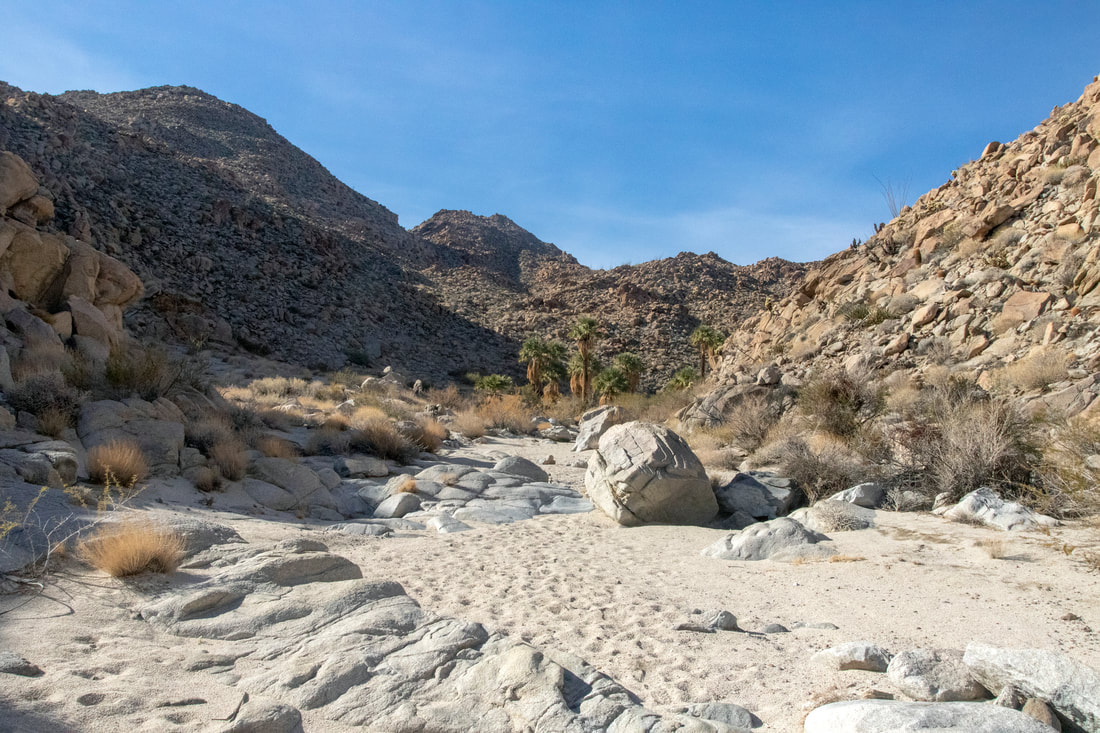 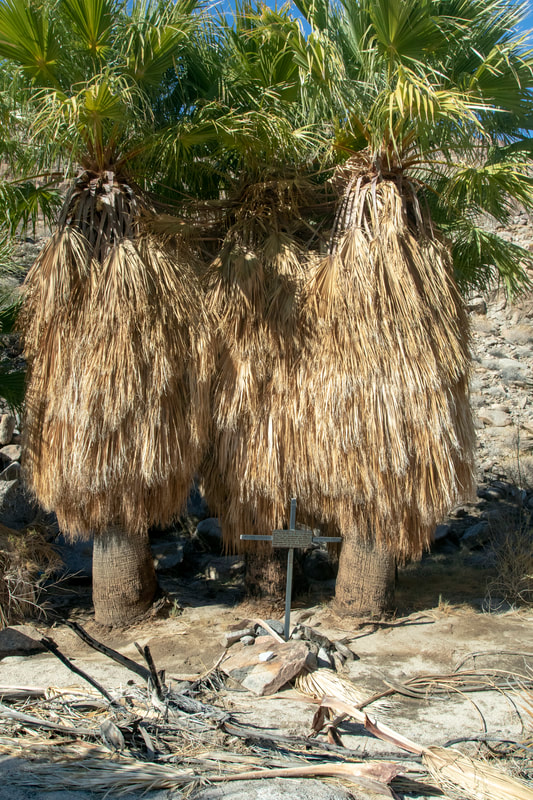 A Group of Petroglyphs
Some rocks over time due to Weathering and or chemical reactions develope a coating sometimes called a desert varnish. Petroglyphs are symbols etched through the darker coating to reveal the lighter rock below.
Pictographs are symbols applied to a surface with a pigment, all rock art spotted on this hike is petroglyhs 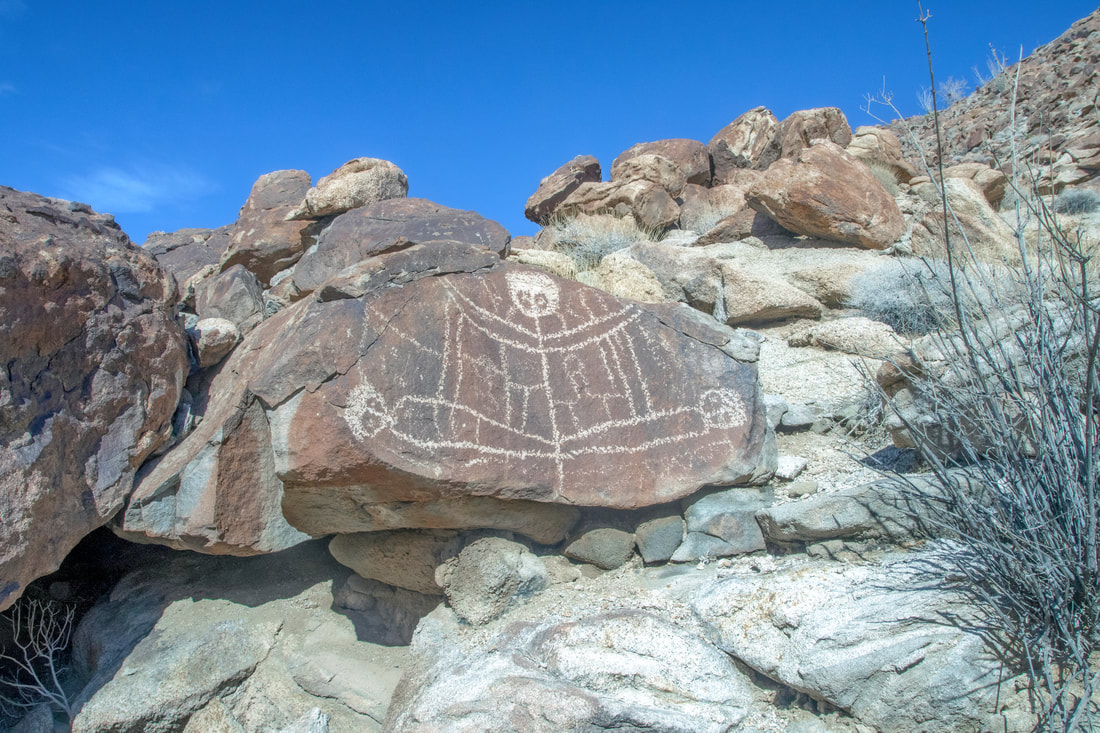 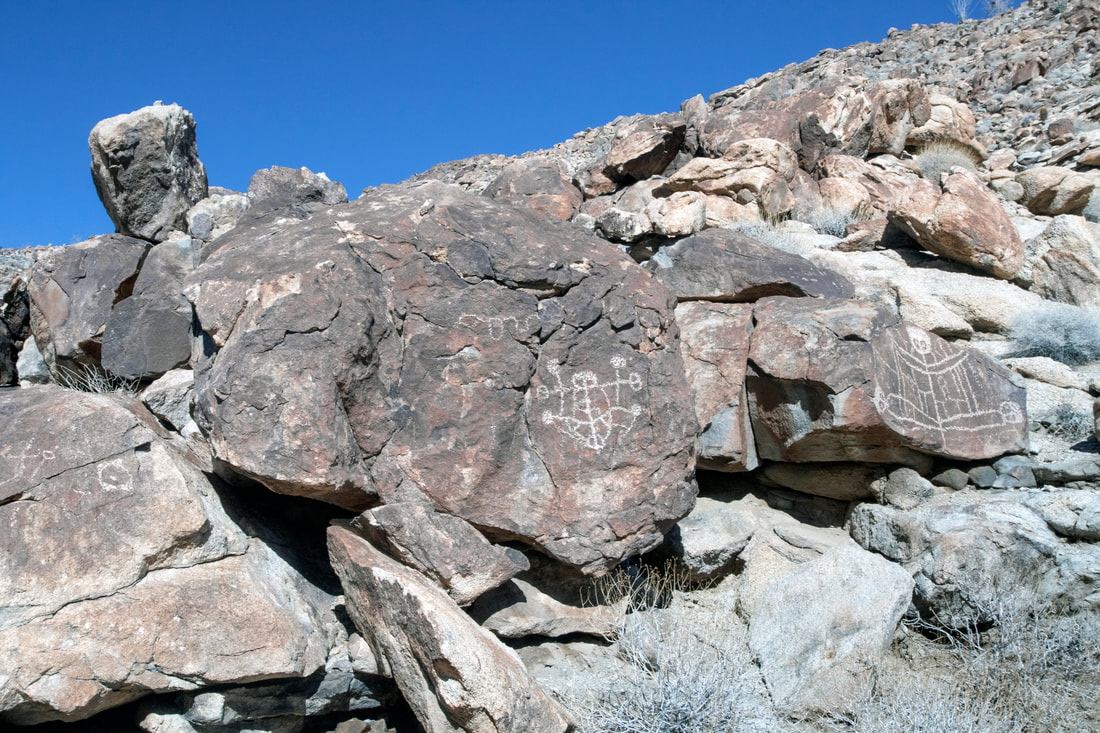 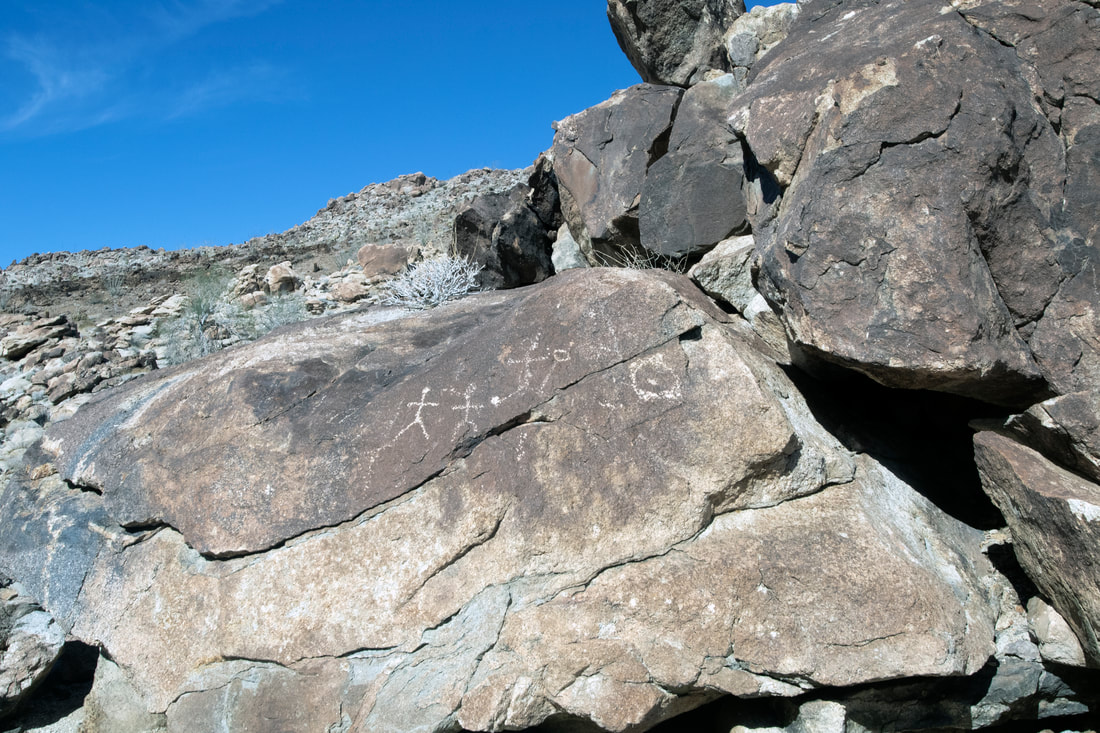 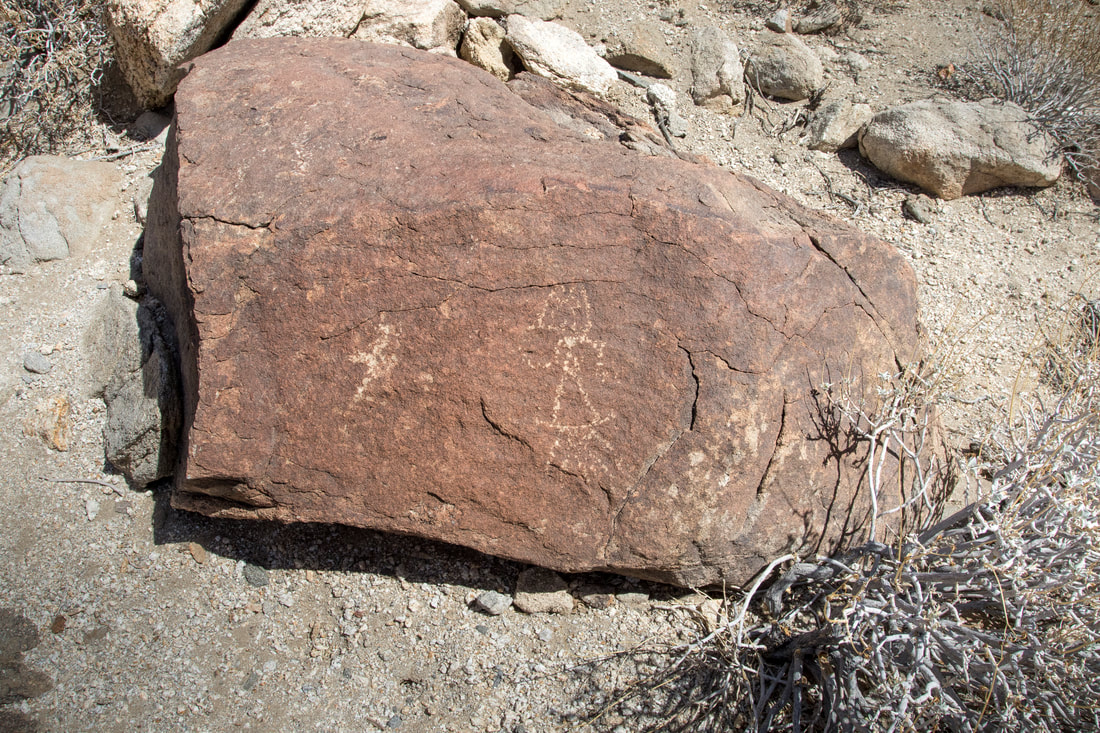 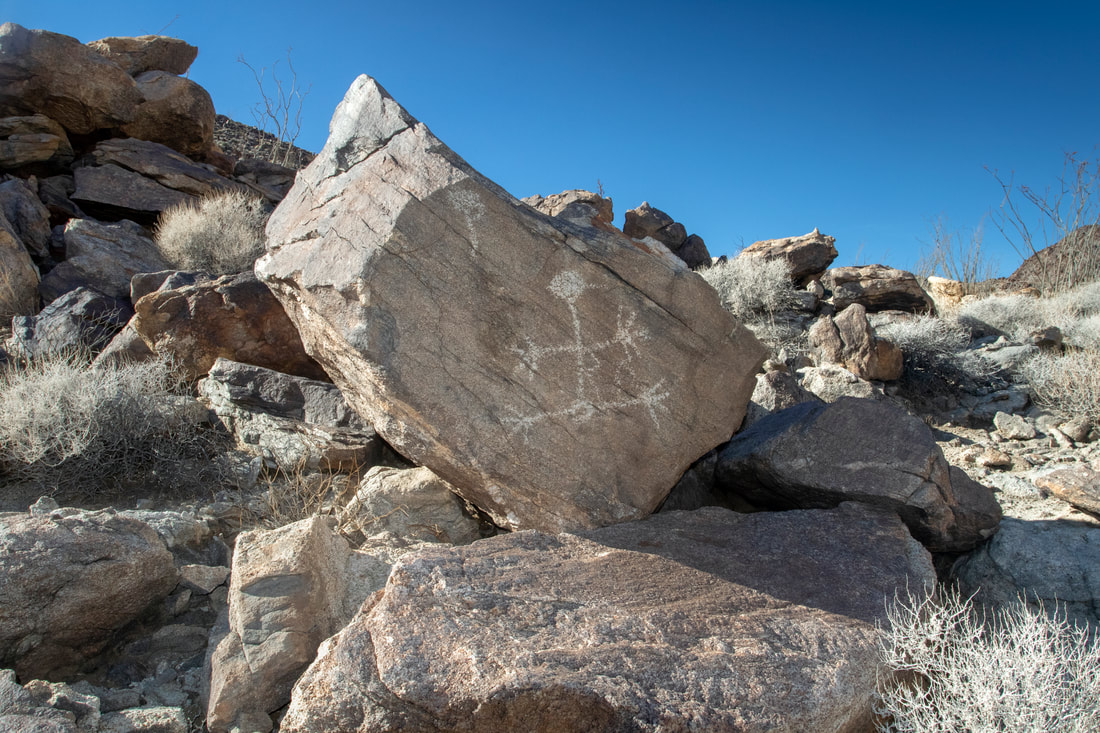 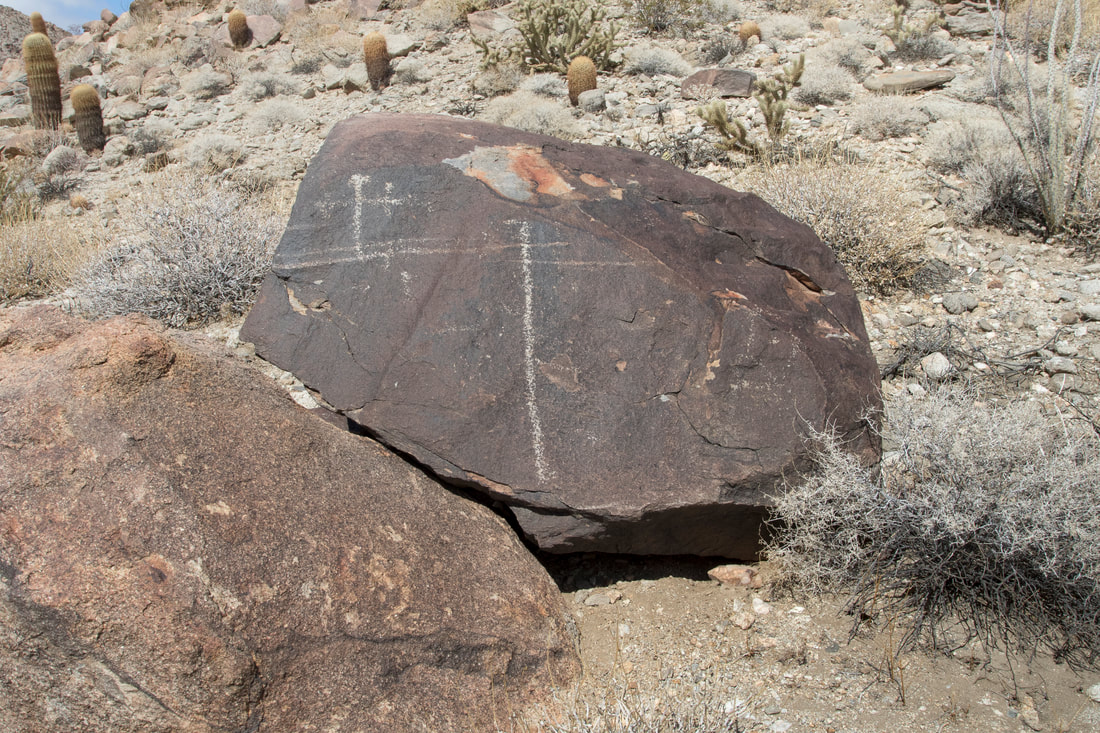 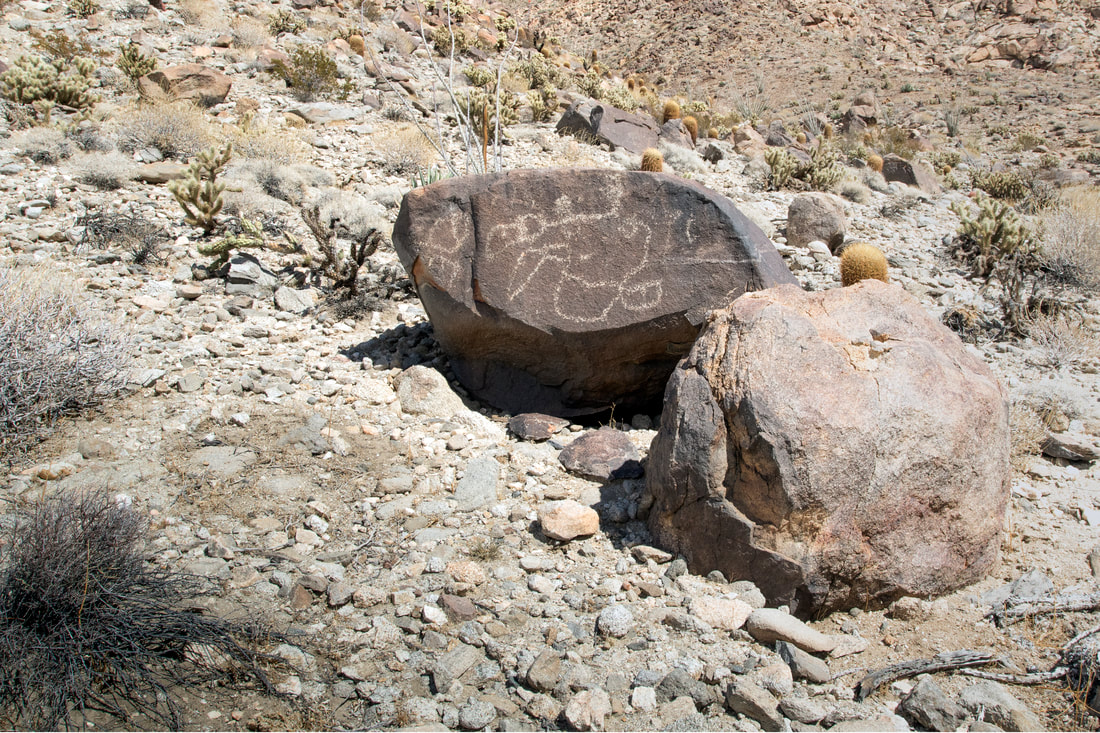 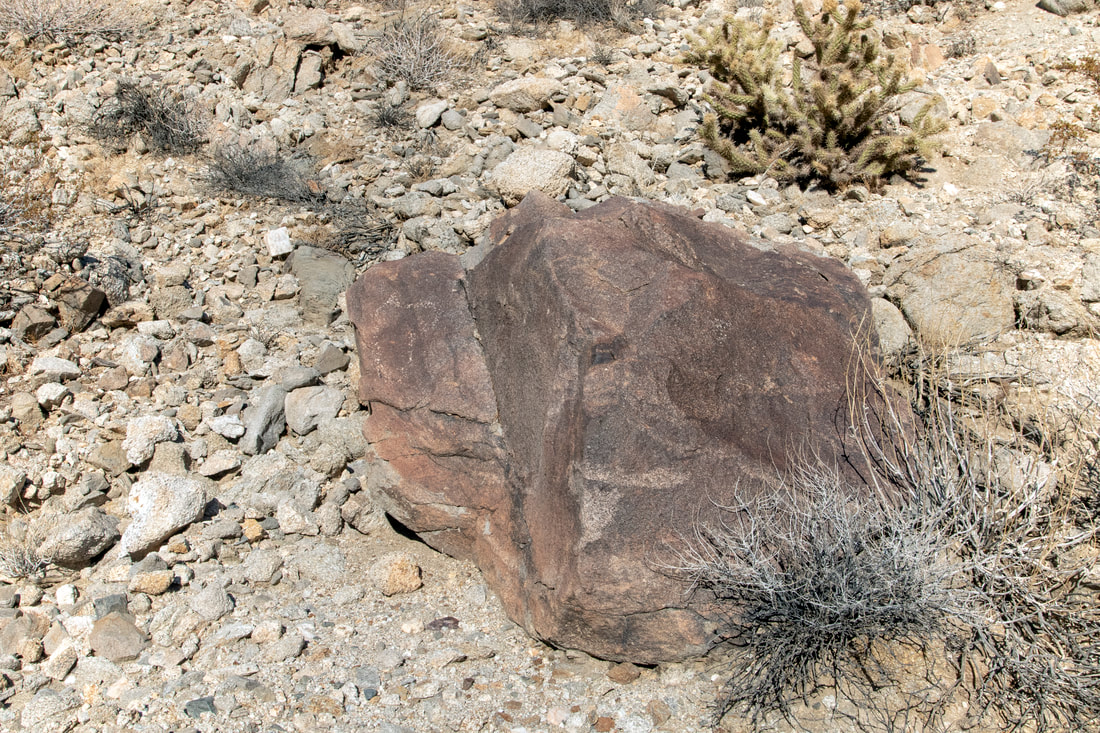 A last Discovery on The way Back 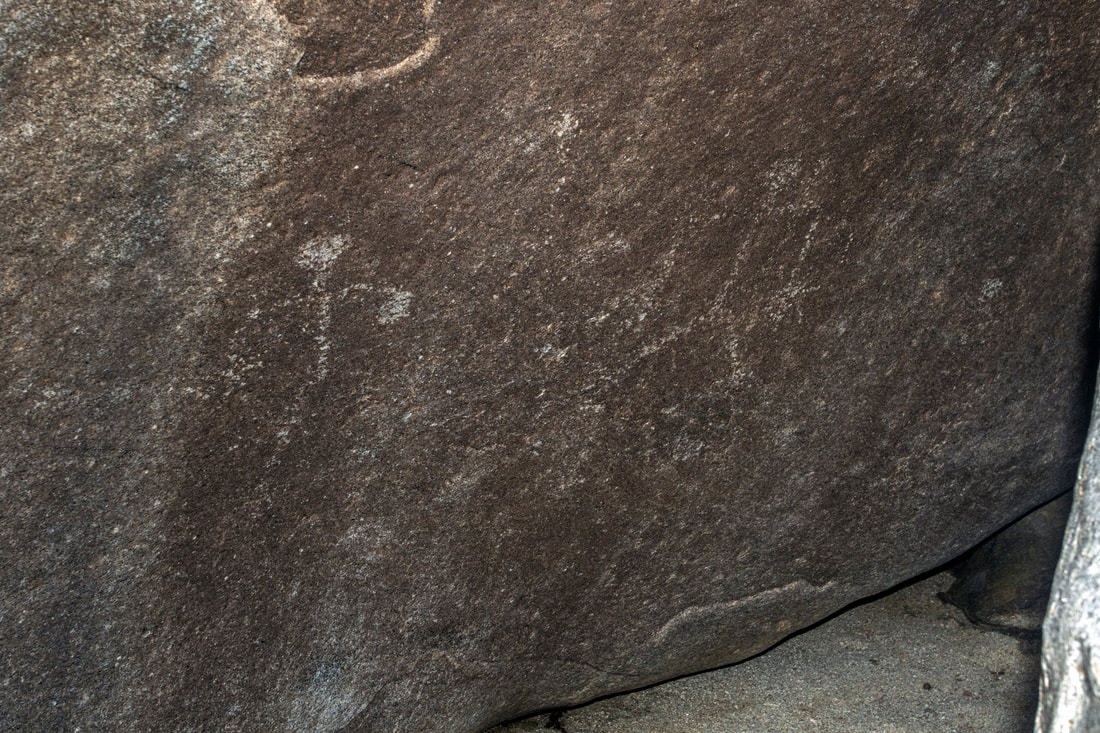 A Few other Findings 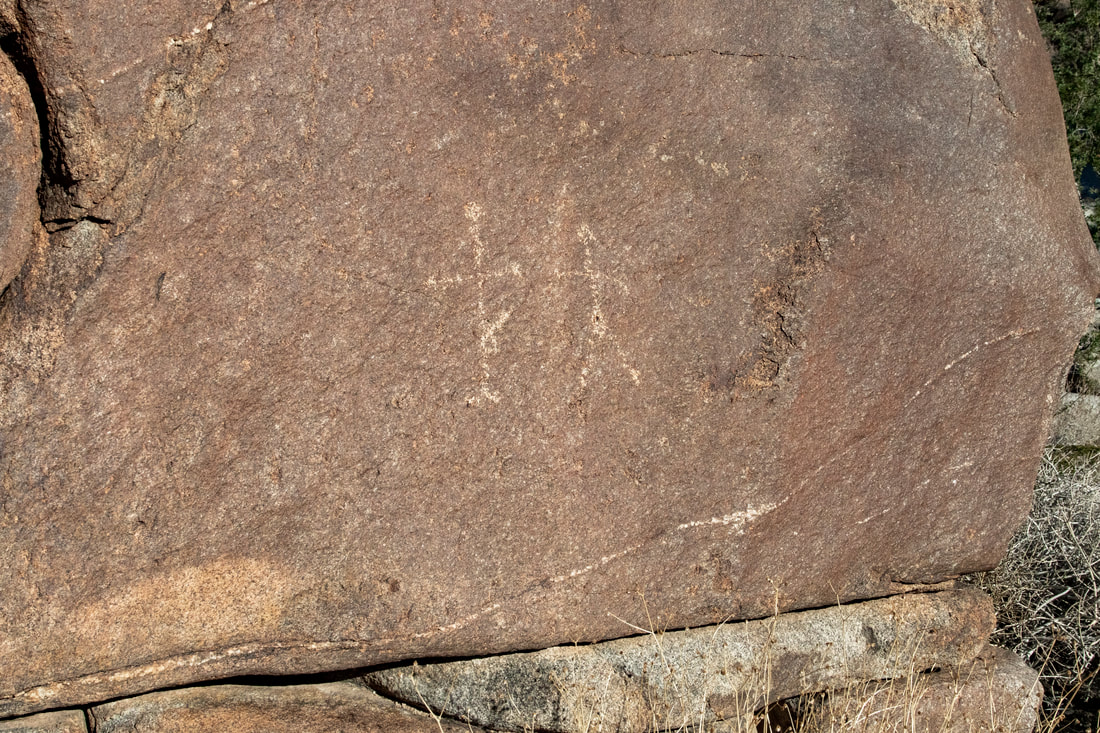 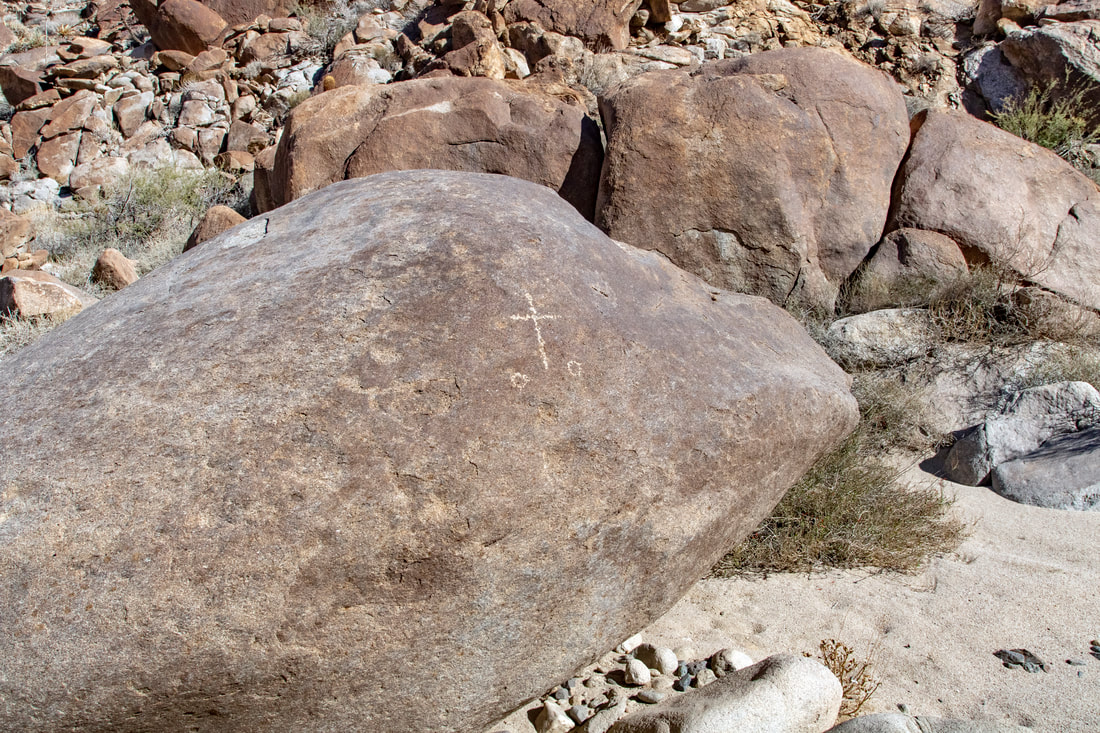